The Indian Space Research Organization (ISRO) has launched a record 20 satellites in a single mission from Satish Dhawan Space Centre with PSLV- C34 in Sriharikota today which led India as a 3rd country in the world to do so. The satellites included Cartosat-2 series satellite for earth observation and 19 co-passenger satellites from US, Canada, Germany, Indonesia and two Indian academic institutions.

ISRO’s other achievements are: 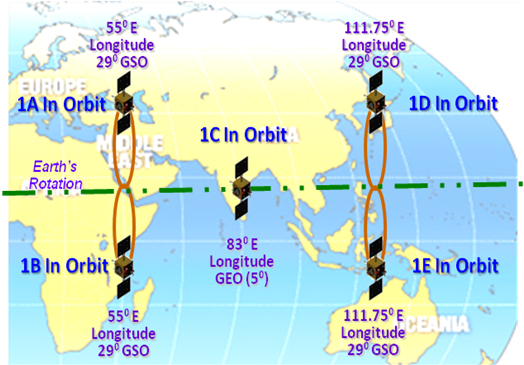 We congratulate to team ISRO for their achievements so far and wish them goodluck for all their future endeavours and making India shine.

These daredevils in their real life are a source of inspiration for millions. People say their body stops supporting for adventurous activities after the age 40, but here are these girls who are proving the proverb “Age is just a number” right.

Few of them can do mountain climbing at age of 100, and few can do ice skating at age 80. These young girls from heart are inspiring millions to follow them in their adventurous journey.

Shirley Webb is 78 years old and she can deadlift 225 pounds at this age.

Tao Porchon Lynch at age 96 has wowed the judges of America Got Talent, 2015 from her dancing talent and was on the major media. Huffington Post a media major described her as “Fireball”.

Jacqueline Murdock likes modeling at age 82 as well. She was in the news when she caught the eye of Lanvin designer Alber Elbaz, who hired her to model in his fall ad campaign.

Doris Long nicknamed “Daring Doris brook her own world record to become the oldest abseiler at the age of 101. She started at 85 and dreams to break her own record at her age 102 once again next year.

Yvonne Dowlen was a Ice Skater. She loved to skate at age 87 also and was running her Ice Skating School. Unfortunately she died at the age 90. Her school can be reached here: https://www.facebook.com/media/set/?…4.117409556698

Harriette Thompson of Charlotte, North Carolina, a 92-year-old cancer survivor entered the record books by becoming the oldest woman to finish a marathon in San Diego in 7hr 24min 36sec. She astonished the youngsters across the world.

Hatts Off to their spirit.

Following Mahatma Gandhi’s words “Be the change you wish to see in the world,” he did so and for all of us who travel on the roads in Bengaluru. He is an engineer named Benedict Jebakumar, a 44 years old systems engineer working at Intuit Technology Services.

He is combing the roads for nails since July 2014. He combed a record of 1654 nails off the road in a single day. Sometimes his bag gets filled and he has to return without collecting more nails. Till date, he has collected about 37 kgs of nails.

He said “The main objective is to spread awareness among people. I will not stop till the authorities sit up and take notice”

It all started as he came to Bengaluru in 2012, he used to take the Outer Ring Road (ORR) to travel from his home in Banashankari to his office in Bellandur. His two-wheeler often got punctured on the ORR near Silk Board. Initially he thought of his bike’s tyre quality, but lately he realized that the same is caused due to the nails and most times they are alike and were found close to places near puncture shops.

Initially he started to collect the nails bare hands, but now he uses a foldable magnetic stick. He leaves his home early 7 in the morning, stops at the specific spots and clear up the area. And he repeats the same on his way back home.

He started a Facebook page named `My Road, My Responsibility’ in October 2014, where he documents his daily findings along with a photograph of the nails on weighing scales.

He explained that the authorities were either lethargic or that the problem was not big enough for them to pay attention.”It causes a lot of inconvenience to commuters. They might fall down from the vehicle or even get into accidents,” he pointed out.”Two arrests have been made in the past but miscreants were released within three months and the nails were back on the road.”

He noted that in the absence of CCTV cameras or official validation for puncture shops, it becomes tough to pin people down.

Jebakumar hopes that someday , authorities will find a permanent solution to this menace.”Till then, I will continue as I am helping many people,” he said.

Anusheela Saha (2016 I Inspire Young Trailblazer Awardee) came up with the idea of The #LightBag – A school bag  – with solar panels and LED lights! The bag can turn to a study lamp at night and can charge itself during the day in just 2 hours.

Biz Divas Foundation supports Sahpathi in its quest to address learning deficiencies among underprivileged children of Silokhra, an urban village in Gurgaon.

Electricity is a major problem in most Indian villages and across the world due to which many children are forced to drop their dream for education. But this simple idea is proving a boom for these underprivileged children that they can continue their studies even after sunset in the absence of electricity.

We can spread the news and help more people and organizations to contribute for the bright future of these underprivileged children. Organizations can undertake it as a part of their CSR.

You can also contribute to this bag’s fundraiser here:https://www.bitgiving.com/iinspire16

The cost involved in making one bag, from start to finish is Rs. 1500, including the cost of the solar panel and LED lights.